Measurements of the initial deflection of a nano pressure sensor

In the fabrication of nano pressure sensors for biological applications, the sacrificial layer etching and the sealing of the two membranes separated by a vacuum gap to form a Fabry–Pérot resonator is critical. Knowing the exact timing of the initial deflection of the membrane after the fabrication process is also key.

It is possible to obtain a fast and non-destructive measure of the deflection of the released membrane before and after sealing to check if membranes have collapsed.

Previously, they had to be inspected by SEM which produced changes in the deflection of the membrane due to the vacuum and the value of the deflection was not as reliable. These measurements were obtained with our optical profiler using a confocal technique. 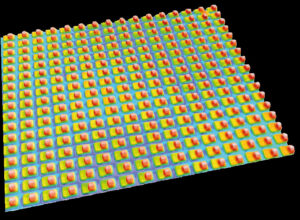