Characterization of natural photonic crystals in iridescent wings of damselfly by FIB/SEM, TEM, and TOF-SIMS

in iridescent wings of damselfly by FIB/SEM, TEM, and TOF-SIMS 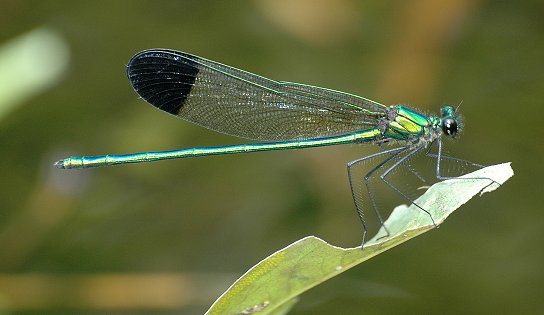 Abstract: The iridescent wings of the Chalcopterix rutilans damselfly (Rambur) (Odonata, Polythoridae) are investigated with focused ion beam/scanning electron microscopy, transmission electron microscopy, and time-of-flight secondary ion mass spectrometry. The electron microscopy images reveal a natural photonic crystal as the source of the varying colors. The photonic crystal has a consistent number and thickness (∼195 nm) of the repeat units on the ventral side of the wing, which is consistent with the red color visible from the bottom side of the wing in all regions. The dorsal side of the wing shows strong color variations ranging from red to blue depending on the region. In the electron microscopy images, the dorsal side of the wing exhibits varied number and thicknesses of the repeat units. The repeat unit spacings for the red, yellow/green, and blue regions are approximately 195, 180, and 145 nm, respectively. Three-dimensional analysis of the natural photonic crystals by time-of-flight secondary ion mass spectrometry reveals that changes in the relative levels of Na, K, and eumelanin are responsible for the varying dielectric constant needed to generate the photonic crystal. The photonic crystal also appears to be assembled with a chemical tricomponent layer structure due to the enhancement of the CH6N3+species at every other interface between the high/low dielectric constant layers.