Medical implant manufacturing requires a very high level of quality control, in particular when parts are intended for long-term implantation in the spinal region as shown in Figure 1. The inspected part presented inhomogeneous marks of undefined origin, which were only revealed at the final visual inspection. Acceptability criteria for visual inspection rely often on human eye interpretation and are generally poorly described in customer specifications, which may lead to conflicts regarding parts’ compliance. As far as machining was involved in the apparition of this defect, regular roughness analyses might have been helpful to evaluate the marks. However, contact stylus 2D profilometer marks created on this complex, finished titanium part would generate a less acceptable defect. Consequently, non-contact optical surface profilometry inspection was chosen to point out the defect origin, measure the efficacy of manufacturing changes intended to avoid it and set a quantitative threshold for non-compliance. 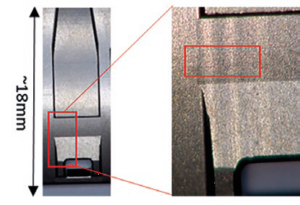 Figure 1. Top view of a medical implant (Left). Zoom in at a region where defects (“stripes”) are shown

After studying the optimum acquisition settings for each technique, the continuous confocal mode, with a magnification of 20X, and an extended measurement of 3 fields of view was found to be the most suitable settings for this study.

Figure 2 shows two topographies, one with defects (non-compliant) and another one free of defects (compliant). The former one shows few vertical “stripes” that are not evident on the compliant surface. 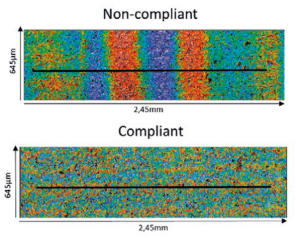 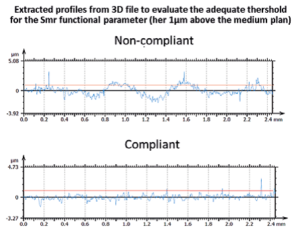 Figure 3 shows 2D profiles extracted from both topographies. As it can be seen, the non-compliant topography shows a strong waviness component that is not evident in the compliant surface. Measurements were repeated and thoroughly analyzed with SensoMAP software to identify the most reliable parameters correlating visual inspection results; parameters such as the Areal Material Ratio and its Inverse can be easily computed from the Abbot-Firestone curve, which can be easily obtained using SensoMAP (Figure 4).

Figure 4. The Abbot-Firestone curve is shown in red for the non-compliant (left) and compliant surfaces (right). It is the cumulative probability density function of the surface profile’s height and can be calculated by integrating the profile trace.

The 3D optical profilometer S neox allowed machining specialists to identify the tool responsible for the defect and to follow its wear during serial production, thus controlling the manufacturing process and improving its outcome. In particular, the Confocal technique has been proven to be an effective technique to qualitatively and quantitatively investigate surface defects.

Extended analysis of compliant and non-compliant parts revealed that common surface parameters like Sa or Sz were not sufficient to catch appearance defects accurately enough. A functional parameter was identified as the most reliable criterion, allowing controllers to undoubtedly differentiate non-compliant parts when needed.

In addition, further studies might consider more advanced tools such as the S neox Five Axis that would enable the 3D reconstruction of the implant’s complete shape, which can be of interest for wear analyses, CAD comparison and/or quality control in further studies.