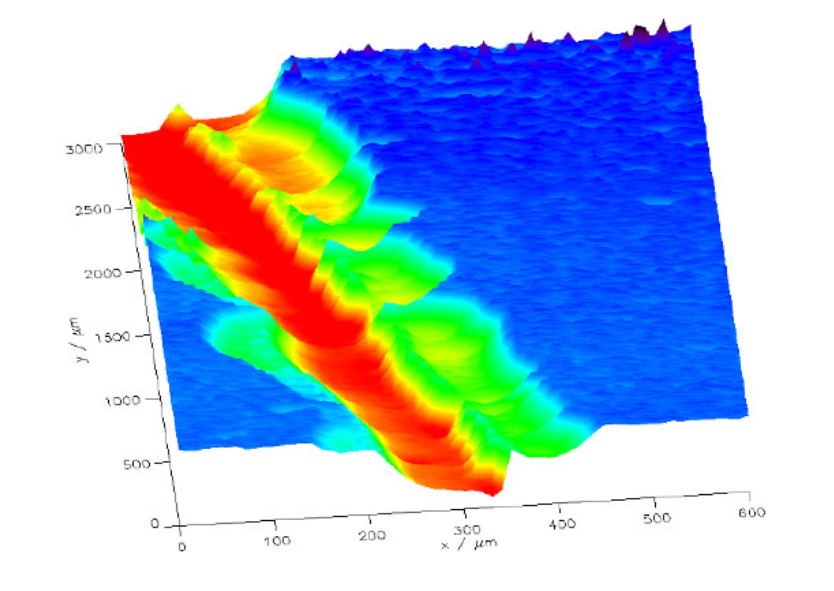 What is Alternating Current-Scanning Electrochemical Microscopy?

Alternating Current-Scanning Electrochemical Microscopy (ac-SECM) is a form of Scanning Electrochemical Microscopy in which a sinusoidal bias is applied to the SECM probe to indirectly measure the impedance response of the sample under study, it is related to the bulk Electrochemical Impedance Spectroscopy (EIS) technique. ac-SECM can be performed with raster scanning of the probe to allow maps of local impedance at a single ac frequency to be collected. The probe can also be held stationary to allow the measurement of individual EIS spectra at a given point on the sample.

The application of an alternating current to the SECM probe was first introduced in 1993 as a means of determining probe to sample distance without the need for a redox mediator [1]. In 2002 it was demonstrated that the use of an alternating current could also indirectly allow the measurement of the local electrochemical activity of a sample [2], with the advantage over dc-SECM that it did not require the use of a redox mediator to do so.

The principles of Alternating Current-Scanning Electrochemical Microscopy are very similar to those of traditional dc-SECM. In ac-SECM, a sinusoidal bias is applied to the UltraMicroElectrode (UME) probe, which, when in close proximity to the sample allows the sample impedance to be measured.

This short circuit results in a lower impedance being measured over these conducting regions, compared to the insulating regions. The electric nature of the sample is not the only factor to affect the impedance feedback as the probe is approached to the sample surface. When the probe is approached to a conducting sample this is also dependent on both the conductivity of the measurement electrolyte and the frequency of the applied ac bias. When a conducting sample is measured in a high conductivity electrolyte, or a low measurement frequency is used, the lowest resistance path to the counter electrode is through the electrolyte, hence the situation is the same as for an insulating sample. Fig. 2. On the other hand, if a conducting sample is measured in a low conductivity electrolyte, or a high measurement frequency is used, the path of lowest resistance for the charge transfer is through the sample (as the double layer capacitance can be shorted).

Decreasing the probe to sample distance reduces the length of the conductor formed by the electrolyte “tube” between the probe and the sample, hence decreasing the resistance between the tip and the substrate. In this case, decreasing probe to sample distance results in a decrease in the impedance measured, Fig. 3. It should be noted that for a conductive sample, the insulating/conducting transition frequency decreases as the conductivity of the electrolyte also decreases.

Figure 1: During ac-SECM approach to an insulator as the probe to sample distance decreases the measured impedance increases. This occurs in all cases regardless of the measurement frequency and electrolyte.

Figure 2: During ac-SECM approach to a conductor in a high conductivity electrolyte, or with a low measurement frequency, the impedance increases with decreasing probe to sample distance.

Figure 3: During ac-SECM approach to a conductor in a low conductivity electrolyte, or with a high measurement frequency, the impedance decreases with decreasing probe to sample distance

As with dc-SECM the signal measured in ac-SECM can be seen to relate to both the sample conductivity and its topography (as reflected by changes in the tip-to-sample distance). Therefore, in some cases, particularly for very rough samples, it can be beneficial to measure ac-SECM in constant distance mode to track the sample topography throughout. Intermittent Contact (ic)-SECM can be used to simultaneously track and measure the sample topography throughout the measurement, however discussion of this technique is outside the scope of this article.

Please click on ‘Request Application Note’  and we will send you the full application note ac-SECM101: An Introduction to Alternating Current-Scanning Electrochemical Microscopy