Skyrmions and antiskyrmions are quasiparticles based on topological spin arrangements. Due to their small size and high stability, they are studied for applications in the field of spintronics, including high density data storage and transfer, as well as for neuro morphiccomputing.1,2
This Application Note bases on the publications of Sukhanov et al. “Anisotropic fractal magnetic domain pattern in bulk Mn1.4PtSn”, Phys. Rev. B 102, 174447 (2020), https://doi.org/10.1103/PhysRevB.102.174447, and Zuniga Cespedes et al. “Critical sample aspect ratio and magnetic field dependence for antiskyrmion formation in Mn1.4PtSn single crystals”, Phys. Rev. B 103, 184411 (2021), https://doi.org/10.1103/PhysRevB.103.184411, that focus on the effect of geometrical confinement on the antiskyrmion formation in the tetragonal Heusler compound Mn1.4PtSn.3,4 Via magnetic force microscopy (MFM), the researchers were able to resolve a thickness dependent formation of either a fractal ferromagnetic domain pattern or a spin helix pattern serving as the template for the nucleation of antiskyrmions.

In an ever-growing digitalized world, recent  estimations suggest that we already produce 2.5⋅1018 bytes of data per single day.5 This staggering amount of data calls for new data storage technologies to stem the tide of expanding  information. Here, skyrmions and antiskyrmions might provide novel solutions for smaller and faster data storage with improved energy efficiency.6 Skyrmions and antiskyrmions are topological spin structures arranged in small vortices, that act as quasiparticles in the magnetic texture of certain host materials.7
Their size may vary between 100 µm and 1 nm.8 Due to their size, stability and response to external electric or magnetic fields, the application of skyrmions and antiskyrmions in spintronics is studied for high density data storage and transfer, as well as for neuromorphic computing.1,2 Antiskyrmions have been observed in some tetragonal Heusler compounds, including also Mn1.4PtSn. To locally resolve magnetic patterns on these compounds and to investigate their dependence on the sample geometry, an imaging method with nanoscale spatial resolution and high magnetic sensitivity is required. Here, magnetic force microscopy (MFM) available on all Park Systems NX research Atomic Force microscopes (AFM), enables the simultaneous real-space imaging of both surface topography and magnetic structure. MFM utilizes magnetized AFM cantilevers that allow imaging of magnetic nanostructures due to their discrimination and sensitivity towards van der Waals (vdW) and magnetic tip-sample interactions.

Both vdW and magnetic forces are measured via changes in the oscillation properties of the cantilever, being reflected either in changes of the oscillation amplitude, resonance frequency or phase. To disentangle vdW from magnetic contributions, MFM uses the different distance dependence of van der Waals and magnetic force. At close proximity, van der Waals interactions dominate the tip-sample force, which allows to image sample topography with high accuracy. At larger distances of 50-500 nm, the short-ranged van der Waals interactions become minimal and magnetic forces govern the tip-sample interaction. Accordingly, MFM traces each scan line twice: the first run is used to image the sample topography, while in the second run the magnetic texture information of the sample is recorded (Figure 1). To keep the tip-sample distance constant during the second pass, the cantilever follows the previously recorded topographic profile, thus always recording magnetic interactions at the same nominal distance. The resulting phase shift of the oscillation provides information on the local magnetic polarization of the magnetic moment, and thereby resolves ferromagnetic domain patterns such as the antiskyrmion lattice that is present in the sample investigated here. 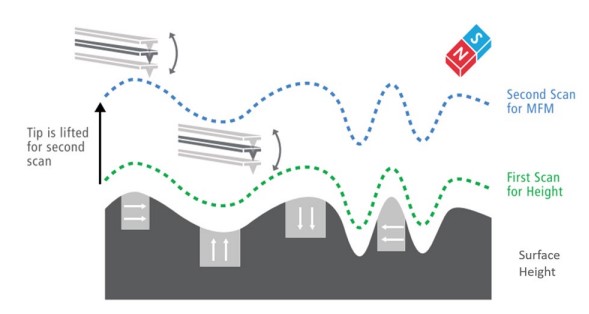 The magnetic properties of a single crystal and thin lamellas of Mn1.4PtSn were investigated using a Park Systems NX10 AFM at ambient conditions. The sample was mounted on a non-magnetic sample holder to avoid magnetic crosstalk. For MFM, a cantilever with a magnetic coating (PPP-MFMR, Nanosensors) was magnetized prior to operation and used for all experiments. MFM measurements were conducted in dual-pass scanning mode (Figure 1). In the first pass, the topography was imaged in Park’s True Non-ContactTM Mode. Subsequently, the cantilever was lifted by 100 – 150 nm and the magnetic stray field was detected via cantilever oscillation demodulation, while retracing the topographic profile (see Figure 1).

Single crystals of Mn1.4PtSn were investigated that were grown by the flux method.10 Properly-grown crystals were polished along the ab plane using a focused xenon ion beam in order to create smooth surfaces, and then imaged in Figure 2.4 For investigating the thickness dependence on magnetization, suspended lamellae of different thicknesses that range from 400 nm to 10 µm were created by cutting a 100 × 100 µm² groove into the side of the single crystal (see Figure 3a).3