Multilayer ceramic capacitors (MLCC) are produced in large quantities, with over a trillion barium titanate-based MLCCs manufactured each year.

They can be found in applications ranging from controlling the anti-lock brake system on a car to a heart monitor in a hospital. Society relies heavily on multilayer ceramic capacitors to be dependable, however they can susceptible to failure. For example, high temperatures from soldering or storage can cause thermal stress, resulting in cracking, increased current or shorts.

To understand how the device fails whether during use, storage, or assembly, Piezoelectric Force Microscopy, or PFM, is a powerful technique to analyze the functionality of devices, including MLLCs. 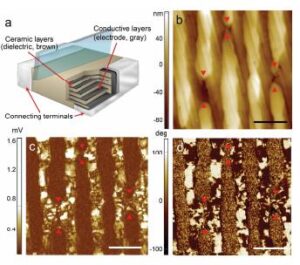