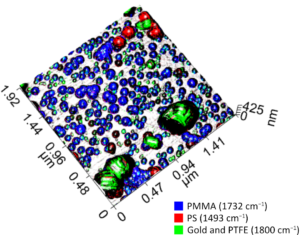 Microplastics, defined as plastic fragments less than 5 mm in length, are classified as primary or secondary depending on if the fragments were already less than 5 mm before entering the environment. In 2014, between 15 and 51 trillion pieces of microplastics (weighing between 93,000 and 236,000 metric tons) are estimated to be present in the world’s oceans.1

Nanoplastics aren’t as well defined, but they are usually plastic fragments less than 100 or 1000 nm in size and can be classified similarly as primary or secondary. While their impacts are still unknown, nanoplastics are thought to be more of a risk to environmental and human health since their small size allows them to cross cellular membranes.

Microplastics are generally studied and identified using either FTIR or Raman spectroscopy. When studying particles greater than about 10 microns in size, FTIR is generally preferred because it is considered to be an easier technique. For smaller particles, Raman spectroscopy is used for its higher spatial resolution despite its many weaknesses such as the background fluorescence signal, low signal, or potential damage to particles from the use of laser excitation.2

While the presence of nanoplastics is certain, the extent of their concentration is unknown due to the lack of analytical techniques for nanoscale chemical analysis. However, the advent of photo-induced force microscopy (PiFM) and photo-induced force infrared (PiF-IR) spectroscopy provided techniques perfectly suited for such characterizations.

IR PiFM is an excellent tool for analyzing nanoplastics for various reasons: (1) its capability to categorize both the size and the chemical identity for particles down to about 5 nm in size; (2) its capability to identify both organic and inorganic nanoparticles; (3) its capability to “see through” thin layers of biological contaminants to identify underlying nanoparticles; (4) its excellent sensitivity without any concern for fluorescence interference; (5) its non-contact and non-damaging measurement capabilities; and (6) its simple sample preparation requirements.

As a demonstration of PiFM’s capabilities, we analyze a sample that consists of four different nanoparticles: PTFE, PMMA, PS, and gold nanoparticles. The nanoparticles are drop cast on a poly-l-lysine substrate. This sample should serve as a reasonable proxy for the complex and varied environmental samples that one might study.

A Vista One IR microscope was used to make an initial AFM image of the sample’s surface. Figure 1 shows the topography in both a 2D grayscale and 3D format. With standard microscopy techniques, there would be no way to identify the chemical identity of such small particles.