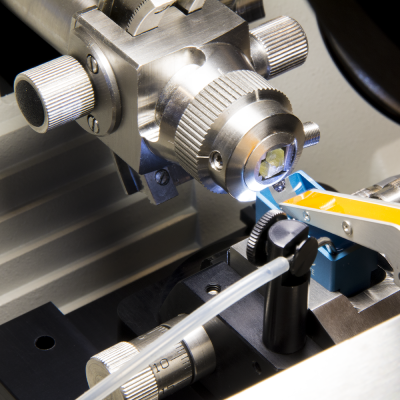 Normal microtomes are used to prepare microscopic samples by cutting thin slices of micrometre thickness off a sample, which is often embedded in a resin. However, low power electrons used in TEM cannot penetrate biological material of more than 150 nanometre. This is where the ultramicrotome comes in. Using a high quality glass or diamond knife, this instrument will produce ultra-thin sections suitable for nanoscale study by TEM, SEM and other high resolution microscopy.

ST Instruments offers a range of ultramicrotomes from RMC Boeckeler for ultrathin sectioning, which can be fitted with add-ons for extra versatility. 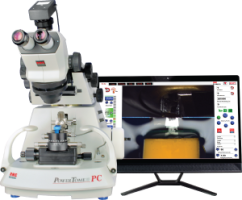 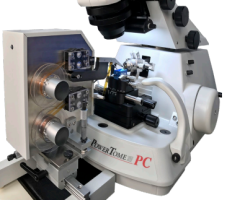 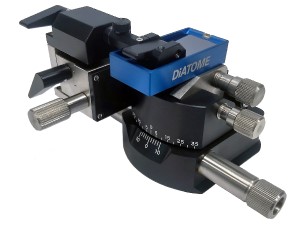 The cutting mechanism of an ultramicrotome consists of a sample holder on a sample arm, and a knife holder which holds both the knife and a water-filled trough called a ‘boat’, in which the sliced samples are collected. The samples are sliced on the stationary knife by the highly controlled movement of the arm. The sample arm is moved down and up again to make a cut, while the advance of the arm decides the thickness.

Sample preparation depends on the material under investigation. Ultramicrotomy is not only used for biological samples, but also for a range of other materials like rubber and plastics as well as ceramics or metals. In order to prevent deformation, the sample is often embedded in a ‘block’ of supporting resin. Samples can also be frozen, and cut using a cryo-attachment.

The ultramicrotome has a trim function that will trim the block face to a size suitable for the user’s initial evaluation, typically in the square millimetre range. When the most promising area for cutting ultrathin sections is thus identified, the block is further reduced before samples are cut. By cutting it in a trapezoid shape, the orientation of the sections can be easily established.

Samples are collected from the water surface in the knife boat, and transferred on a grid to the TEM, SEM or other high resolution microscope for imaging.

There are other methods to reduce samples to nanometre thickness, like ion beam or other processing techniques, but none of these produce samples that match those prepared by ultrathin sectioning in clearness of the surfaces or production speed. For nanoscale research using electron microscopy, ultramicrotomy is the method of choice.

The RMC Boeckeler microtomes can also provide automated sectioning, the MT990 rotary microtome features a motorized, programmable, consistent cutting speed. The motor drive will also reduce the strain of repetitive, high output histology sectioning. The rotary microtome can be used both for hands-off or manual operation.

After ultramicrotomy, most sections require contrasting, often by the application of lead and uranyl salts. To apply them in a safe and healthy environment, RMC Boeckeler provides an automated electron microscopy stainer, capable of contrasting up to 40 grids in one run. A special unit is also available for freezing samples and processing them under cryo conditions. This often yields superior structural morphology and improved immunolabelling over routine resin embedding. For routine tissue processing and resin embedding, an automatic microscopy tissue processor can be used. This unit will be available soon.

PowerTome XL
Park et al. obtained electron microscopy images from the SARS-CoV2 virus in the first Korean patient using the RMC Boeckeler PowerTome MT-XL. In order to observe virus particles, they fixed a Vero cell monolayer infected with material from the patient and cut the virus-loaded cells on the ultra-microtome at 65 nm.