The state of lithiated carbon can be observed by the G-band as it changes in response to the stage. The defect of carbon can be identi­fied by the D-band. 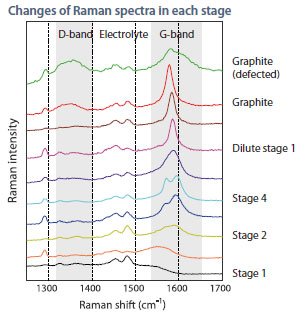 Fig 1: Raman spectra of each stage of carbon anode.

Figure 2 is Raman imaging of carbon at shown voltages. At discharged state, defected carbon scattered within particles are observed. During charging process, each stages of dilute stage1, stage 4, stage 2, stage 1 are identifi­ed. In each stage, the defect carbon are observed uncharged. 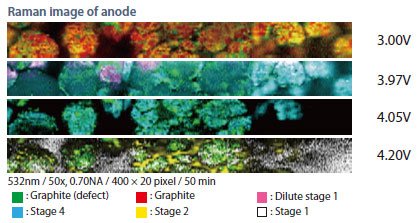 The image below right is the optical microscopic (OM) image of carbon anode at shown voltage. The details of change between stages are observed by the color variation which occurs when carbon is lithiated/delithiated. However, the corresponding range of voltage is much smaller in OM compared to Raman spectra; it is quite indistinguishable with OM images. Notably at the early stage of charging, OM images show little, but Raman images show distinctive differences between stages.

Raman spectral changes with Li+ transportation in the cathode during charge/discharge processes. Shifting Raman spectra of LiCoO2 provide information of charging stages in progress. Therefore an inhomogeneous distribution of SOC is observed. 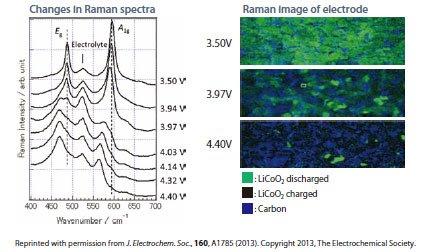 The change in crystallinity of its active material is one of the causes of cycle deterioration in electrodes. Though X-ray diffractometry (XRD) is commonly used for its evaluation, Raman Spectroscopy can easily visualize the changes in crystallinity in just a few minutes. In addition, when compositional changes of elements occur, its varied components and location can also be analyzed. 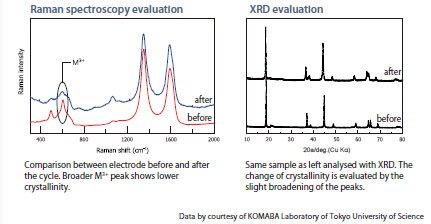