The effect of surgical insertion on dental implant surface topography

The effect of surgical insertion

Surface topography is currently considered one of the most important surface properties regarding the biological response. Accordingly, an intense amount of implant research has been focused on the development of new surface treatments to increase surface roughness, aiming to enhance the biological response and ultimately, the osteointegration. However, the higher peaks and features of the enhanced roughness may break and detach or be modified during the insertion procedure into bone. Therefore, an important aspect to consider, though often overlooked, is whether the increasingly complex surface features found on modern dental implants are retained after insertion.

The aim of this research was to investigate the impact of the insertion procedure on the surface topography of dental implants. To achieve this, it is necessary to evaluate if the surgical procedure degrades the enhanced surface roughness by measuring and comparing the surface topography both before and after insertion exactly at the same locations. The present paper is a part of a research1,2 carried out by Dr. Alaitz Zabala, Dr. Wilson Tato, Dr. Andrea Aginagalde and Dr. Iñigo Llavori.

Wennerberg et al.3 took the first steps in measurements’ standardization suggesting some guidelines for dental implant characterization: three samples in a batch must be evaluated, three dimensional measurements must be made at three evaluation areas (tops, flanks and valleys), the filter size must be specified, and at least one of each height, spatial, and hybrid parameters should be presented. In addition, Wennerberg et al. claimed that Confocal profilometers and Interferometers are the only acceptable methods to evaluate densely threaded oral implant designs. This is one of the main reasons why the commercial 3D optical profilometer Plμ (former version of S neox, Sensofar Metrology, Spain) was chosen to carry out this work. This unique optical profilometer is the only one in the market that includes Confocal, Interferometry (Phase Shifting and Coherence Scanning Interferometry) and Focus Variation techniques embedded into the same optical instrument. This feature allows for quickly evaluating dental implants with different optical techniques. Many international dental research labs have used Sensofar’s equipment for dental implants surface characterization, validating the technology and making it one of the gold standards for this purpose.4–12

In our study dental implants were measured with confocal at four different locations (Fig. 1), both before and after insertion in cow rib bone (which mimics human bone, Fig. 2). 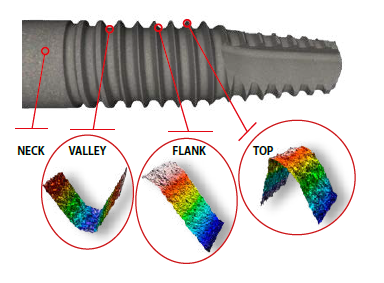 Figure [1] Denomination of the different evaluation sites and profile examples

Due to the complex geometry of threaded dental implants, the measurement of different locations of the implants and the location of the same region both before and after insertion present a challenge.

Different locations were correctly positioned by means of an ad-hoc developed dental implant handling and positioning device with 3 degrees of freedom (Fig. 3).

Fig. 4 shows axonometric representative projections of the measurements taken at the same regions before and after insertion for the acid etched implants. The sites that showed statistically significant topographical parameter variations (p<0.05) are marked with *. It can be noted that the sharp peaks initially present became less prominent or had completely gone after insertion in all the sites under study except the neck. 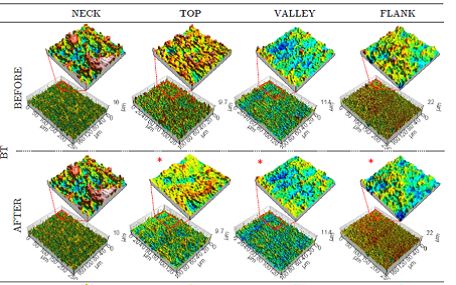 Figure [4] Representative axonometric projections of the measurements of an acid etched dental implant at the four evaluation sites both before and after insertion. Those sites presenting statistically significant topographical parameter variations are marked with*.

Confocal technology has proven to be an effective technique to investigate and characterize surface topography and the damage generated in modern dental implant surfaces after the insertion into bone. This non-destructive measuring technique allows characterizing different locations of the complex threated dental implants with high resolution. Qualitative and quantitative analysis were done to evaluate the surface modifications. The following main points can be concluded from the various components of this study: