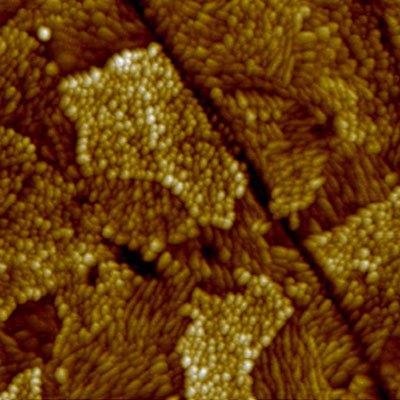 ST Instruments offers a range of Atomic Force Microscopes (AFM’s) from Park Systems. This company played a critical role in the development of atomic force microscopy technology, and has remained the leading innovator in nanoscale microscopy and metrology throughout its long history. With headquarters in Korea, the US, Japan, Singapore and Europe, they create some of the world’s most accurate and most effective AFMs for research and industry. 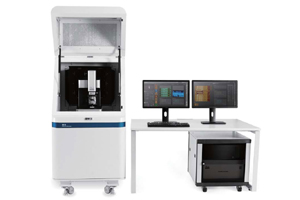 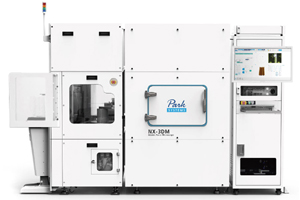 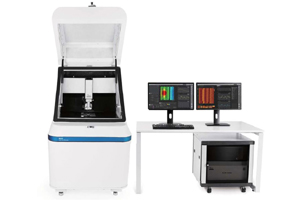 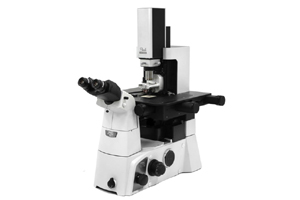 If you really want to get a feel for the structure of a surface, Atomic Force Microscopy is the technique to use. It scans surfaces with a probe that ends in a 5 to 10 nm sized tip. Information on the surface topography is gathered by probing the surface – a bit like reading braille script with your finger.
Atomic Force Microscopy makes it possible to create images based on topological information at sub-nanometer resolution (topological imaging). However, the interaction of the tip with the surface also allows measurement of mechanical properties (force measurement), electrical, thermal and magnetic properties. Finally, the tip can also be used to manipulate a sample in a controlled way at the nanometer level.

How does Atomic Force Microscopy work?

The AFM tip is attached to the free end of a cantilever. Cantilever and tip together are usually referred to as the AFM probe. When the tip is passed over the surface of a sample, upwards movement and deflection of the tip is measured using laser light reflected via the cantilever onto a position-sensitive photo diode. The sample is moved during scanning, and movement is controlled by piezoelectric elements.
To create images, the tip is in (near) contact with the sample. When it is approaching the surface, attractive forces dominate, causing the cantilever to bend towards it. As the tip makes contact, however, repulsive forces begin to dominate, bending the cantilever upwards. This deflection of the cantilever is measured and recorded. A feedback loop is used to keep the force between the probe tip and the surface constant. The result is a topographical map of the surface. The settings of the feedback affect the noise, and thus the image quality.
Imaging is just one application of Atomic Force Microscopy. Different modes are available to measure different interactions between the probe and the sample. 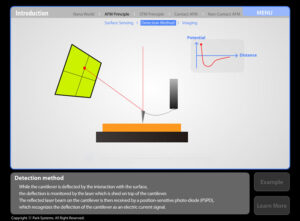 Why use Atomic Force Microscopy?

The major application for an atomic force microscope is imaging sample topography in high resolution. The challenge for high resolution imaging lies in the capability of the specific instrument to keep the AFM tip sharp. There are several different imaging modes available:

Apart from creating images, Atomic Force Microscopy allows you to characterize a wide array of properties based on the interaction of the probe with the sample. e.g. mechanical, electrical, magnetic or optical. AFM probes can also be used to manipulate the sample, for example for lithography or to perform experiments through molecular pulling. Thus, Atomic Force Microscopy allows you to probe the properties of a surface on nanoscale. 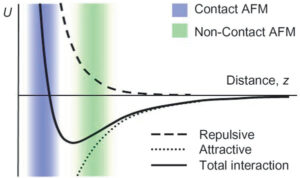 Lithium ion batteries are powering most of our modern electronics. To further improve their performance, it is vital to understand the electrical and mechanical properties of electrode materials, preferably at nanometre scale.
One of the more effective tools used to measure electrical properties of these electrodes on this small scale is Scanning Spreading Resistance Microscopy (SSRM). This technique, which is based on Atomic Force Microscopy, simultaneously measures both electrical properties and topography. However, SSRM has some disadvantages such as rapid wearing of the tip though contact with the sample and low signal-to-noise ratio.
Park Systems recently developed an Atomic Force Microscopy mode which performs SSRM in an approach-retract manner (PinPoint SSRM) which eliminates tip-sample contact, while still providing excellent electrical properties measurements as well as acquiring topography. The system allows an overlay of different measurements, like topography, resistance and conductance, to provide detailed insight into the properties of the batteries. This will help engineers to understand their electrical and mechanical properties. 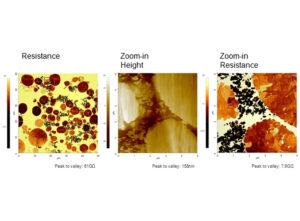 As Atomic Force Microscopy measures both surface morphology and mechanical properties, it is an excellent technique for a review and inspection of quality control for possible defects in coated surfaces. For example, it can distinguish a scratch made on a glass surface before coating from a scratch after coating. In the latter case, the glass will be exposed.
The PinPoint™ nanomechanical mode which Park Instruments developed for the Atomic Force Microscope collects high resolution topographical data while simultaneously obtaining force-distance data. This allows simultaneous measurement of the surface morphology and nanomechanical properties including modulus, adhesion, deformation, stiffness and energy dissipation.
Topographical data will show a similar pattern in a scratch made before or after coating. Furthermore, in a sample that was scratched before coating all the material will have the same mechanical properties. However, in a sample scratched after coating, the exposed glass will stand out against the coating because of its different mechanical properties. This type of information will help to identify problems in the production process.

In ever smaller electrical devices, it is increasingly difficult to measure the current distribution in the material they are made of, which is an important parameter in determining the performance of devices. Conductive Atomic Force Microscopy (C-AFM) provides both electrical properties and topography at the same time and at nanoscale. However, this method has its drawbacks like quick tip wear from high frictional force due to continuous tip-sample contact and high signal-to-noise ratio.
PinPoint™ is an operational Atomic Force Microscopy mode developed by Park Systems that can be coupled with C-AFM to offer an innovative solution to these problems. This method operates in an approach-retract manner, ensuring a frictionless operation. Studies on ZnO nanorods, which show a remarkable performance in electronics, optics, photonics, and photocatalysis, shows this new method is superior to either C-AFM or tapping AFM.
One advantage of the PinPoint™ Atomic Force Microscopy mode is that contact time and contact force between the tip and sample surface are controllable (as opposed to the standard tapping mode), allowing acquisition of accurate and reproducible data even with soft samples, such as polymers. 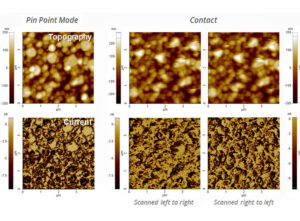